C.S. Lewis and Me 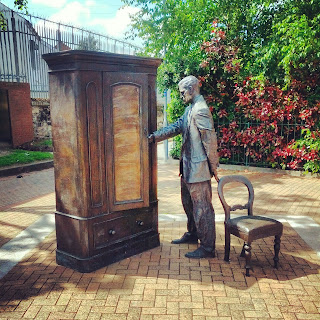 "C.S. Lewis was the first person to make me want to be a writer." - Neil Gaiman

As an author growing up in the East part of Belfast, the works of another author from the same area, Clive Staples Lewis were probably harder to avoid than bumping into Van Morrison while walking up Cyprus Avenue. His tales chronicling the magical world of Narnia lit up my childhood while in many ways influenced the world I created for Amelia Black many years later.

I remember as a boy, my older sister would take me to the Strand Cinema, not far from where we grew up. At the top of our street there was an old and rather frightful looking house; larger than ours but had fallen into disrepair, almost looking derelict. If you pass it today it's been restored to breathtaking quality but when I was about five or six years old my sister told me C.S. Lewis used to live in that very house. I never approached the house to see if those claims were indeed true and to this day I've had it neither confirmed or denied - perhaps in some ways I just don't want it to. I just didn't want to lose one of the few moments of mystery and magic left in my life.

Lewis of course died 23 years before I was born, on the same day as John F Kennedy's assassination and the passing of another great writer Aldous Huxley, so even if he did once take residence there his memory or any trace of his works which may have laid dormant in that house were condemned to the sands of time.

As a child you don't let such silly logic get in the way and my imagination wandered. Part of my badly wanted to creep into this house and possibly find lost works or maybe a final Chronicle of Narnia which was never published. Remembering this over 20 years later shows the sort of impact Lewis had on my life.

I'm not saying I'll ever be mentioned in the same breath as Lewis when all is said and done and people are asked to list 'Great Belfast Writers', far from it. The fact that one boy from East Belfast who spent his days reading Beatrix Potter and illustrating his own stories about animals can make that sort of impact always gave me the inspiration to do the same. Perhaps more so than Mr Gaiman, because of this local connection, Lewis was the first person to make me want to be a writer.

Starting today Belfast celebrates the man, the life, the myth and the legend of C.S. Lewis with the first Festival in his honour.

Please do come and maybe he'll also inspire you too...

http://www.communitygreenway.co.uk/CSLewisFestival
Posted by Andrew Moore at 02:55